Wood packaging such as crates and pallets are critical to international trade, and to the global economy. Consider that almost two billion wood pallets are used daily within the United States to store and transport goods, and that approximately $400 billion worth of American trade is exported each year using wood pallets and containers.

Wooden packaging is often made from recently milled timber, however. As a result, there is the potential for live insects to be transported unknowingly from one part of the world to another, where they can wreak havoc in stands of timber that have evolved without the benefit of natural defenses to hold invading species at bay. According to the U.S. Forest Service, many of the non-native bark- and wood-infesting insects now in the United States are thought to have arrived in untreated wood packaging.

The motivation for the establishment of ISPM-15 followed some high-profile infestations in North America as well as in other parts of the world. Infestations have been caused by Asian Longhorned Beetle, first identified in the United States in 1996, and the Emerald Ash Borer, initially discovered in Canada and the U.S. during the 1990s.

The Asian Longhorned Beetle was first discovered in 1996, where it was found to be attacking ornamental trees in Chicago and New York City. It subsequently was detected across most northeastern states and California. This insect is native to Asia, where it destroys many deciduous tree species, including maples, elms, and poplars. It is believed to have arrived in untreated wooden crates shipped from China.

The Emerald Ash Borer is another destructive insect that has inflicted considerable damage. It is speculated to have arrived in North America in the 1990s in solid wood packaging and was first detected around Detroit, Michigan, and Windsor, Ontario in 2002. It has killed millions of ash trees already and still threatens most of the 8.7 billion ash trees located across North America.

With the knowledge that wooden packaging can be a pathway for the international movement of forest pests from one country to another, new international standards under ISPM-15 were established in 2002 and fully implemented in 2006.

ISPM-15 requires that all wood packaging material (WPM) used for international shipments be heat-treated (HT) using conventional kilns or heat treatment chambers, fumigated with methyl bromide (MB) prior to export or treated with dielectric (microwave) heating (DH). All WPM treated to meet ISPM-15 requirements must be marked with a designated ISPM-15 stamp. In Canada, only dielectric heating and heat treatment are allowed. All producers of ISPM-15 stamped products must be approved.

In order to become approved, facilities are inspected and certified. After certification, the supplier is assigned a number and issued a stamp that is applied to wood packaging material to show it is compliant with the ISPM-15 standard. The stamp marking acts as a passport for wood packaging to officially enter ports of entry in foreign countries, and is recognized as sufficient proof that the wood products meet the ISPM-15 standard. There are more than 100 participating countries, worldwide. Lists are available of approved HT agencies and approved MB agencies in the U.S.

The U.S. Forest Service stresses that when properly implemented, ISPM-15 treatments “have been scientifically proven to be highly effective in killing quarantine pests.” In one study, the Nature Conservancy found that the infestation rates of pests in wood packaging decreased by up to 52% between 2003 and 2009, following the implementation of ISPM-15 in 2006.

As NWPCA notes, “Since the wide-scale adoption of ISPM-15 in the United States, there has been a significant reduction in[BG1]  new large-scale establishments of invasive wood-boring insects.”  The full collaboration of the wood packaging industry and plant health organizations in countries around the world has proven to be highly successful in controlling invasive species and thereby ensuring that wood pallets and packaging can continue to safely play their critical role in international commerce. 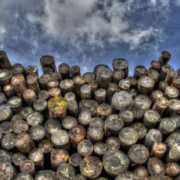 Talking to the Source: A Conversation with Leigh Greenwood of The Nature Conservancy

Did You Know – What is Silviculture? Scroll to top