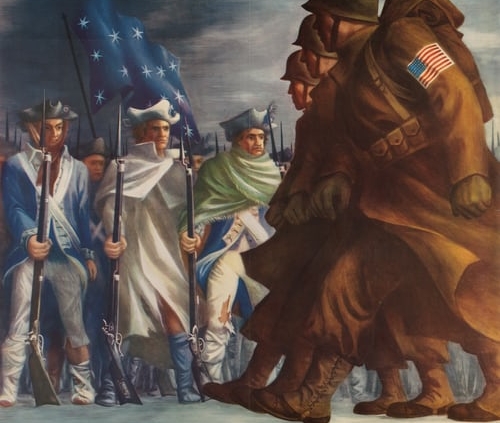 Innovation during Crisis: Wood Pallets and Packaging during WW2

During the COVID-19 pandemic, we have witnessed firsthand how the urgency for supplies and equipment has led to desperate measures and innovation. We are reminded of the old saying, “necessity is the mother of invention”.

The world faced another grave crisis during World War ll. With the fate of the free world hanging in the balance, it was a time that called for creative approaches to storing, protecting, and shipping supplies efficiently. Just as success in battling the COVID-19 crisis has depended upon getting needed medical supplies to frontline workers, wartime success also hinged on getting shipments as quickly as possible to the front. Wood pallets were to play a critical role.

While breakthroughs such as pallet standardization and pooling, block-style pallets, as well as design with cube utilization in mind are often attributed to the decades that followed WW2, they were already being practiced during the 1940’s. Here are three crucial developments from the war that endure in importance today.

Recognizing the need for pallet standardization

As war-related wood pallet usage exploded during WW2, the forces suffered from a case of too many people ordering too many different pallet sizes. Various footprints were created at depots to address particular circumstances, a trend that hampered inter-plant operations. There was no guarantee that the receiving plant would have the necessary material handling equipment to handle inbound pallets. In a similar vein, the prospects for pallet reuse and pooling were uncertain. In the early years of the war, military depots found themselves sorting and accumulating empty pallets that weren’t the right size needed for reuse and outbound shipping.

Pallet size standardization would follow. The Second World War marked the first conflict where material handling strategy was directed from a high organizational level. When the overabundance of pallet sizes came to the attention of military logistics leaders, they sought to instill a degree of standardization. They reduced the number of allowable sizes, but there was a recognition that more than one uniform size would be required.

For example, the Navy standardized on the 48×48-inch pallet, which worked well for ordnance. The Army followed suit. For its part, the Quartermaster Corps chose 32×40-inch as its optimal footprint but recognized that it would only serve about 85% of its needs. By 1944, its list of acceptable pallet sizes had narrowed to include only 32×40, 36×48, and 48×60.

The block rental pallet was introduced in 1992 to the U.S. grocery supply chain. At the time, it  was widely celebrated as the “new kid on the block”. Block pallets offered ease of pinwheeling, thus allowing for greater efficiency in loading and storage. The block pallet, however, has a much longer history. Its invention is generally attributed to Norman Cahners, an officer at the U.S. Navy’s ordnance laboratory in Hingham, Massachusetts. As Cahners noted in his 1943 patent application:

It is an object of this invention to provide a pallet which will minimize the complications of stacking a plurality of loaded pallets with forklift trucks in confined spaces such as in warehouses, freight cars, ships’ holds, etc., by permitting ready packing of the pallets in corners…

A block pallet was also being developed independently in 1943 by Milton Boone, a Quartermaster Corps officer at the Oakland, California depot. He received a patent in 1949.

Pallet and container design with cube utilization in mind

In today’s supply chain, increasing the product density in unit loads and the cube or space utilization of transport vehicles and warehouses is top of mind. The importance of cube utilization was well understood by material handling decision-makers of the time, however. Early in the World War II palletization effort, the Eastern quartermaster depots strongly resisted instructions to utilize palletized handling, despite the operational efficiency that it would afford. Officers argued that the high profile pallets being specified would take up valuable space and reduce load capacity by 10%. It was only after pallets were redesigned to a lower profile that palletized shipping became adopted on the East Coast.

While pallets were used by leading companies prior to WW2, the crisis created a great urgency to move supplies to the theatre of war as quickly as possible. The pallet was called to action in a huge way. Thanks to wartime innovations such as the 4-way entry pallet, standardization, pooling, and better cube utilization, it was well on the way to establishing itself as an enduring industry workhorse.

History and the Wood Pallet: A World War 2 Story