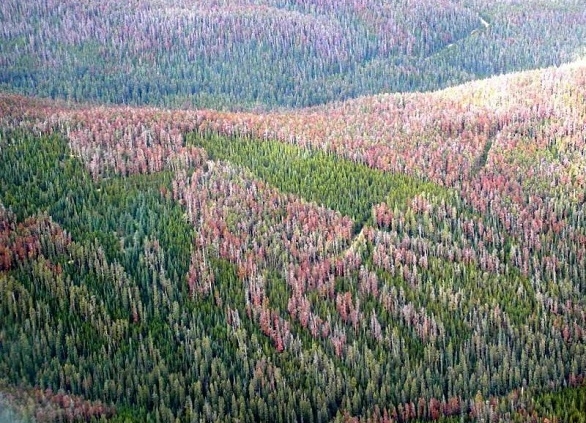 Life Returns After a Forest Fire

Forest floors after a fire are ripe with nutrients to support new life. A natural part of the forests’ life cycle, plants and animals have adapted to survive and thrive after such fires.

Most animals flee from the initial scene of the fire but over time, they return. Certain types of wood boring beetles can detect a fire’s heat or smoke from more than 30 miles away. They are usually the first to arrive on scene of a forest fire. These types of insects are always present in the forest, living underneath the bark of trees, and their activities help burnt trees decompose.

Other animals that follow the beetle post-fire are woodpeckers, as some species feed on beetle larvae and other insects. Next to return are small ground animals, that will make homes out of shrubs that may have survived the fire. Once the population of small animals returns, coyotes will follow, thus over time reinvigorating the burnt forest with life.

Trees and other plant life have evolved ways to survive forest fires. They can re-grow from their leaves or needles, re-sprout from their roots, and some even have fire resistant seeds that will sprout after a fire. According to Dr. Peter F. Kolb of the University of Montana, their success depends on the intensity and duration of the fire. In other words, a fire that burnt at a high temperature for a long period of time could inflict the greatest damage to plant life and reduce survival rates.

The mountain pine beetle epidemic, which began in British Columbia and spread across western North America, has impacted an estimated 18.1 million hectares of forest in British Columbia. This beetle invades weakened trees, creating more fuel for future forest fires. The epidemic has spread into Wyoming and Colorado, which had been triggered by an extended drought in that area during the 1990’s and 2000’s.

According to Dr. David R. Coyle of the University of Georgia,

“Trees are pretty well-defended against bark and wood-boring beetles. Trees produce copious amounts of resin, and this acts to push beetles out of holes they may be making, and usually entombs the beetle. When a tree is successfully colonized by beetles, its usually because the tree is weakened by something, such as drought, fire, overcrowding, or poor genetics. The beetles may be the final straw, but most of the time the trees have to be weakened enough to allow a beetle to colonize it.”