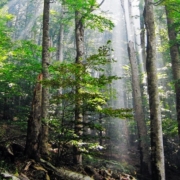 In 1992 the United Nations met in Rio de Janiero in what’s now known as the Earth Summit. At this meeting, 172 governments participated to discuss continuing effects of climate change and how to stop it. One of the non-legally binding documents created from this event, Agenda 21, made several recommendations regarding the need for sustainable forestry practices to limit deforestation. This meeting prompted the creation of forest certification non-profit organizations that currently oversee sustainable forest management practices around the world. There are three of these organizations prevalent in North America: FSC, SFI, and PEFC. 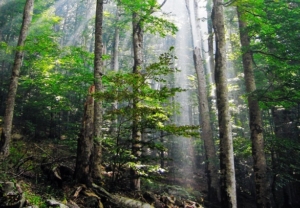 Photograph from Wikipedia, distributed under a CC-BY 2.0 license.

The first international non-profit created after the 1992 Earth Summit in response to the need of forestry oversight is the FSC. In 1990, informal meetings among environmentalists, lumber traders, timber users, and human rights organizations took place in California. According to the FSC’s website, these meetings “highlighted the need for a system that could credibly identify well-managed forests as the sources of responsibly produced wood products.”

After the 1992 Earth Summit, it became apparent that this group must evolve into the international non-profit entity it is today. FSC is the world’s second largest forest certification program and as of October 2016, has certified more than 191 million hectares of forest area among 82 participating countries (one hectare is equal to 100 acres). They’re endorsed by the Nature Conservancy and the World Wildlife Fund.

The SFI program launched in 1994 in the United States, also in response to the 1992 Earth Summit, to promote sustainable forestry practices. It was the US forest sector’s contribution to promote sustainable forestry practices. SFI founders believe that there are different ways to sustainably manage forests that allows them to be more competitive in the market. Since their inception, they’ve garnered a great deal of industry support. In 2005, they were endorsed by the Programme for the Endorsement of Forest Certification (PEFC), which is the largest international certification program in the world. To date, more than 30 indigenous groups across North America manage over 2.0 million hectares of forest land, certified to the standards of SFI.

Programme for the Endorsement of Forest Certification (PEFC)

The largest forest certification non-profit program on Earth is the PEFC. It was established in 1999 by national organizations from 11 countries. Whereas the FSC and SFI programs are audited by third parties in what’s considered to be a “top-down” process, the PEFC is considered a “bottom-up” process. The program enables “the development of national standards tailored to the political, economic, social, environmental and cultural realities of the respective countries, while at the same time ensuring compliance with internationally-accepted requirements and global recognition.” In other words, this system allows land owners within participating countries to use a forest management system that’s compliant with their local laws and international forestry standards.

The first countries to be PEFC certified were in the European Union. In 2004, forests in Australia and South America became certified, and in 2011, China came on board. As of June 2016, more than 300 million hectares are PEFC certified.

These programs were created to ensure forests will continue to sequester carbon and provide trees for future generations. Although each program is subject to criticism, their work has shown that there are different, effective ways to sustainably managing forests within the international community.

This is the third of a five-part series on forests and climate change.

Previous: The Carbon Cycle;  How Foresters Limit Their Carbon Footprint