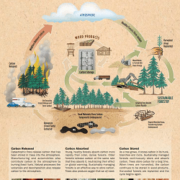 Excess carbon dioxide in the atmosphere depletes the ozone layer and impacts global temperatures. Young, fast growing trees pull carbon from the oxygen during photosynthesis, store the carbon within their trunks, branches, and leaves, and release oxygen back into the atmosphere. When trees, branches, and leaves burn in a forest fire, the carbon stored within them is released back into the atmosphere. However, the emissions are dramatically reduced when forest byproducts are burned in a biomass-fueled electric generation facility. When treated this way, emissions from burning are considered carbon neutral.

Sierra Pacific Industries and the Forest Foundation are pioneers in researching the carbon neutrality of sustainably managed forests. As they explain in their infographic,

“Young, healthy forests absorb carbon more rapidly than older, dense forests. Older forests release carbon at the same rate that they absorb it, neutralizing their effect on global warming. Sustainably managing forests is an effective way to store carbon. As a tree grows, it stores carbon in its trunk, branches, and roots. When trees are harvested, the carbon continues to be stored in wood products.”

Trees reach a point in their aging process when the emissions from the natural decaying process exceed the carbon they sequester. It’s like filling up a cup of water. There’s only so much empty space within a cup for it to hold water. Once it’s full, it overflows. Over-mature forests release excess carbon into the atmosphere similar to how water overflows from a cup when you try to pour too much into it.

The Need for Biodiversity

However, this does not suggest that mature trees are bad and should be removed from forests. Nor does it suggest that young trees within a forest are the only plants that absorb carbon. Mature trees play an important role in preserving the forest’s ecosystem. Recent studies suggest that certain species of mature trees have ways of passing carbon underground to younger trees as a way to help them grow, adapt, and survive. Moreover, the biodiversity of forests supports carbon absorption from a variety of plant life. Forest ecosystems are incredibly diverse and they rely on that diversity to flourish, survive, and absorb carbon from the atmosphere.

This article is the first of a five-part series on how forests help fight climate change. The next articles and topics will be: