Howard Hughes was a billionare playboy before the term become de-riguer for the billionaires of today, both real and fictional. Hughes father had patented technology for oil drilling machinery and Howard used that beginning (Hughes Tool Company) as a springboard to other business interests and pursuits. This included film-making and aviation.

Howard Hughes started Hughes Aircraft as a subsidiary of Hughes Tool Company. Turns out, he became a skilled aviator who, in 1935, set a speed record of 352 MPH in an experimental aircraft known as the H-1. He also built the largest wooden cargo plane ever known-the Hercules H-4, or more famously, The Spruce Goose.

Origin of the Spruce Goose

In 1942, during the dark days of World War II, German submarines were sinking a large number of allied ships. As a result, finding a way to transport troops and materials to the allies became a top priority for the United States.

Henry Kaiser, a steel magnate and shipbuilder, took on the task of finding a solution. He knew Hughes’ genius as an aviation expert and pioneer could help him solve this problem. Howard Hughes agreed to help Kaiser so they met and signed an agreement for the HK-1 (Hughes Kaiser 1), which was the original model designation of the aircraft.

Due to the war, the materials needed to build a plane were scarce, aluminum and steel were being used to help advance war efforts. Therefore, Hughes and Kaiser had to find a creative solution to building a plane without these materials.

Despite the plane’s name being Spruce Goose (a name Howard Hughes despised), the aircraft was manufactured almost entirely from a birch based wood with a process known as Duramold. 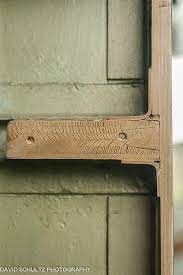 The Duramold process involves impregnating birch ply’s with a synthetic phenolic resin. For reference, billiard balls are often made with phenolic resins. The ply’s are then laminated together with heat and pressure in a formable mold. The end result is a lightweight structural material that is very versatile in use. It was especially critical during WW2 as a replacement for aluminum and steel which were in short supply. The only parts of the aircraft that were not wood construction were the engines and electronics.

Kaiser and Hughes started the planning and building of the Spruce Goose in 1942. However, from the beginning Henry Kaiser and Howard Hughes had a rocky relationship. Hughes was a perfectionist and not very personable, and Kaiser had concerns over continual delays in construction and how much money was being spent to complete the project. As a result, Henry Kaiser left the project, leaving Hughes to complete it on his own. Ultimately, the plane was not finished until 1947, two years after the end of World War 2.

The Spruce Goose was originally designed as a prototype. What made the Spruce Goose unique amongst other planes of the time was not just being made almost entirely out of wood, it was the plane’s ability to take off and land on water at such an enormous size. The aircraft was essentially a big ship that could fly.

With 8 engines, the Spruce Goose is a high-wing flying boat prototype originally built for transportation of military personnel and equipment. As mentioned, the frame is constructed primarily of Duramold with a light silver finish. Both wings have a stationary pontoon hanging down to balance the plane in the water. The engines are Pratt & Whitney R-4360 Wasp Major 28-cylinder air-cooled radial piston design.

How Much Did It Cost?

The Spruce Goose went a little over budget. In fact, it went so over budget that Congress started investigating Howard Hughes to see if he misused the funding he received from the United States Government.

The total cost of building the Spruce Goose was $23 million dollars, equivalent to approximately $287.5 million today. In 1947, Howard Hughes had to appear before a United States Senate Committee to testify, and they ordered Hughes to prove that the plane he had built was capable of flight.

The Maiden and Final Flight

The United States government wanted to see the Spruce Goose fly and Howard Hughes obliged. On November 2, 1947 off the coast of Long Beach CA, Howard Hughes steered the huge aircraft through the water in front of thousands of interested onlookers and doubters.

He taxied the Spruce Goose for several minutes before finally taking off. Hughes flew the plane 1 mile, which took 30 seconds, and reached a height of 70ft before landing the plane for the last time back into the chop of the bay.

The flight was a success, and Howard Hughes had redeemed himself by proving that the enormous and enormously expensive wooden aircraft that took too long to build was truly flight worthy. Unfortunately, the plane never flew again after that initial flight, and further production of any H-4 Spruce Goose planes never came to pass.

Where is the Spruce Goose Today?

The Spruce Goose changed hands quite few times during it’s history in dock. Originally, Howard Hughes kept the plane in a hermetically sealed dry dock. In 1980, it was purchased by the Aero Club of Southern California and a geodesic dome was constructed around it as an exhibit hall attraction.

In 1988, The Walt Disney Corporation purchased the attractions and real estate, and eventually decided they did not want to maintain it. In 1992, the Aero Club managed to find a suitable host and location in the Evergreen Museum in McMinnville Oregon. It was a colossal effort to transfer the aircraft to the Evergreen Aviation Museum, which required careful disassembly, trips by barge, train and truck, and reassembly at the site. The Spruce Goose is still currently on display at the Evergreen Aviation Museum and is a great experience to take in if you happen to be in the area.