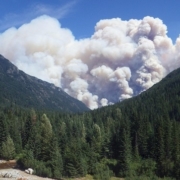 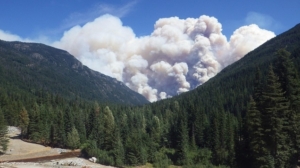 Forest fires that take place near heavily populated areas are by far the most dangerous because of the threats they make on human life and the subsequent property damage that can follow. The Fort McMurray fire of May 2016 in Alberta, Canada was caused by humans and is the costliest fire in Canadian history, costing insurers an estimated $3.58 billion Canadian dollars. In the United States, those charged with starting a forest fire can face heavy legal consequences. Keith Emerald was charged with starting the 2013 Yosemite Rim fire from a campfire on steep terrain. Although charges against him were dropped, he faced a 5-year imprisonment and minimum $250,000 fine. With the threat of jail time and heavy fines, Americans face harsh punishments for starting forest fires.  One practice used to prevent forest fires is to schedule a controlled burn, where land that is at high risk for fire is intentionally burned in a supervised and regulated setting. When properly executed, this can give forests the benefit of fire without posing risk to nearby communities or taxing public resources.