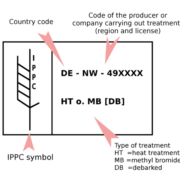 The sustainable standards of ISPM 15 regulations apply to recycled wood pallets and prevent them from spreading wood boring insects across international borders. These standards help ensure recycled wood pallet and crate companies do their part to protect the environment. ISPM 15 separated recycled pallets into two categories: repaired and remanufactured.

Buying used pallets is like buying a used car. You could buy a reliable used car that might have had the transmission, radiator, or other parts replaced and it will still be safe and effective to drive. It’s the same car it always has been; it’s simply had a part or two replaced. In the same way, replacing the bad parts of a pallet extends the life of the pallet. ISPM 15 has two categories for recycled pallets. The first category is repaired pallets, referred to in section 4.3.2 of ISPM 15.

Repaired pallets have had up to one-third of the components replaced. This is like the new car that had its radiator replaced. Everything is still new except for that one part. However, once a pallet reaches the end of its life, it’s dismantled and the usable boards are stacked and separated for re-use on other pallets. The unusable boards are recycled into products like wood chips or sawdust for different industries.

It’s possible to make a pallet entirely from recycled boards. If a pallet has had more than one-third of its boards replaced, then ISPM 15 considers it remanufactured, referred to in section 4.3.3 of ISPM 15. This is like the car that has had its engine, transmission, and radiator replaced with parts (new or used) all sourced from different places. When a remanufactured pallet has been repaired with lumber sourced from different locations, separate rules apply. Processes need to be followed to ensure that pallet is ISPM 15 compliant and won’t spread wood-boring pests from one country to another.

The governing agency for each ISPM 15 participating country distributes a unique number to be assigned to a stamp. Each company that participates in the ISPM 15 program must clearly stamp each heat treated wood product that leaves their facility with their number. That way, the source of each wood product can be traced in case there’s a problem. Depending on the pallet’s origin, a used pallet can sometimes have more than one stamp on it to certify heat treatment. In the United States, it’s required that all previous stamps be obliterated before a pallet is heat treated. Only then can a new stamp be applied.

The language of ISPM 15 is used as a minimum requirement for all countries that participate. The agency that oversees ISPM 15 in each country has the authority to include additional standards. Put differently, the rules that apply to businesses in Canada are different than the rules that apply to businesses in the United States. The agency that oversees the Canadian ISPM 15 program is the Canadian Food Inspection Agency. In the United States, it’s the American Lumber Standards Committee. Refer to links below for more information. 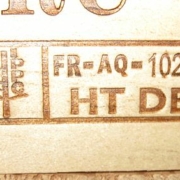 The International Stands for Phytosanitary Measures No. 15, referred to in the industry as ISPM 15, is an International Phytosanitary Measure developed by the International Plant Protection Convention (IPPC). According to its documentation, the primary goal is to “reduce the risk of introduction and spread of quarantine pests associated with the movement in international trade of wood packaging material made from raw wood.” The language is comprehensive, covering all forms of wood packaging that serve as pathways for pests that could pose a risk to living trees.

The IPPC is a multilateral treaty signed into effect on December 6, 1951. As of 2010, 74 countries participate in the program. According to the IPPC, the “ISPMs provide globally harmonized guidance for countries to minimize pest risk without creating unjustified barriers to trade, ultimately facilitating their exports and imports of plants and plant products.”

In North America, if a wood products company wants to export lumber then they must comply with the program. The most common way for companies to comply with ISPM 15 standards is by heat treating lumber. In order for lumber to meet these standards, the internal temperature of the timber must reach 56 degrees Celsius or 132.8 degrees Fahrenheit for 30 minutes in a kiln. Certain types of lumber, such as plywood, oriented-strand board (OSB), and sawdust are exempt from these standards as they are exposed to the heat-treating requirements during the manufacturing process. The purpose of heat treating lumber to meet ISPM 15 standards is to reduce the risk of spreading wood boring insects.

Wood packaging companies that participate in the ISPM 15 program are assigned a stamp with a unique number and that stamp must be clearly applied to all products used in export. They must keep written logs of incoming heat treated lumber and any outgoing orders where the stamp was used. Compliance is monitored and enforced by third party companies that make unscheduled monthly visits to the wood products companies to ensure all rules and regulations are followed. Some of the largest North American inspection companies are Timber Products, Pacific Lumber Inspection Bureau, and West Coast Lumber Inspection Bureau and they work closely with the United States and Canadian governments. If a wood product company doesn’t follow the rules of the program, they can get their stamp revoked and they won’t be allowed to certify lumber products for export.

Lumber and other wood packaging companies across North America have widely adopted the ISPM 15 standards and these standards are intended to help protect our forests from wood-boring pests. According to ISPM 15 language, “Pests associated with wood packaging material are known to have negative impacts on forest health and biodiversity. Implementation of this standard is considered to reduce significantly the spread of pests and subsequently their negative impacts.” By adopting ISPM-15 protocols into the manufacturing processes and by achieving the high levels of industry compliance, the wood packaging industry will enhance its role as stewards of the resource, reducing the risk of spreading wood-boring insects which results in elevating the sustainability of the products we produce.